Here are some student’ website portfolios and movie essays from a digital WAW writing course pilot program at Hunter College which ran from  Spring 2013 to Fall 2014, as well as some of the Composer’s comments on making the movies, portfolios, and  essays– all posted and credited here with their permission:

Nicole Krishtul (Fall 2014): “I greatly valued the opportunity to take formal academic research and put a creative spin on it by condensing it into a short movie. I attempted to combine the dense theoretical foundations of Burke’s theories with the results of the study in an accessible and entertaining way. Doing so was not only an interesting experiment on how to present information, but also helped me get a better understanding of my own research by pinpointing the most essential elements.  It was certainly a rewarding process.”

Sean’s Note: Nicole’s 120 Portfolio includes two remarkable projects.  Her research project examined student dorm room decorations to conduct a Burkean analysis of the rhetoric of identification, especially his idea of consubstantiality.  Her movie version of the the project (below) is a perfect companion piece to her more formal textual essay.  Nicole presented both at Hunter’s Undergraduate Research Conference (shown left) on March 25, 2015.  She also won the 2015 Hunter English Department Best Research Essay Prize and she is now revising the project for journal publication.  Yet, my favorite piece here is Nicole’s family history of life in Ozarintsy, the last surviving Jewish village in the Ukraine.  Across four drafts, she found a remarkable balance between the intimate story of her parents’ courtship and the larger story of systemic repression and anti-Semitism with the Soviet Union.

Naimi Zahid (Fall 2014): I’ve always been interested in the feminist movement and how women are presented in society; so, being able to research that subject on my own was pretty exciting.  I feel like the movie fit in perfectly with my research.  It reflected certain aspects of my paper but also raised awareness to the bigger issue.  I wanted people to look at my research, watch the movie and realize that the sexual objectification of women is a serious issue that needs to be addressed. 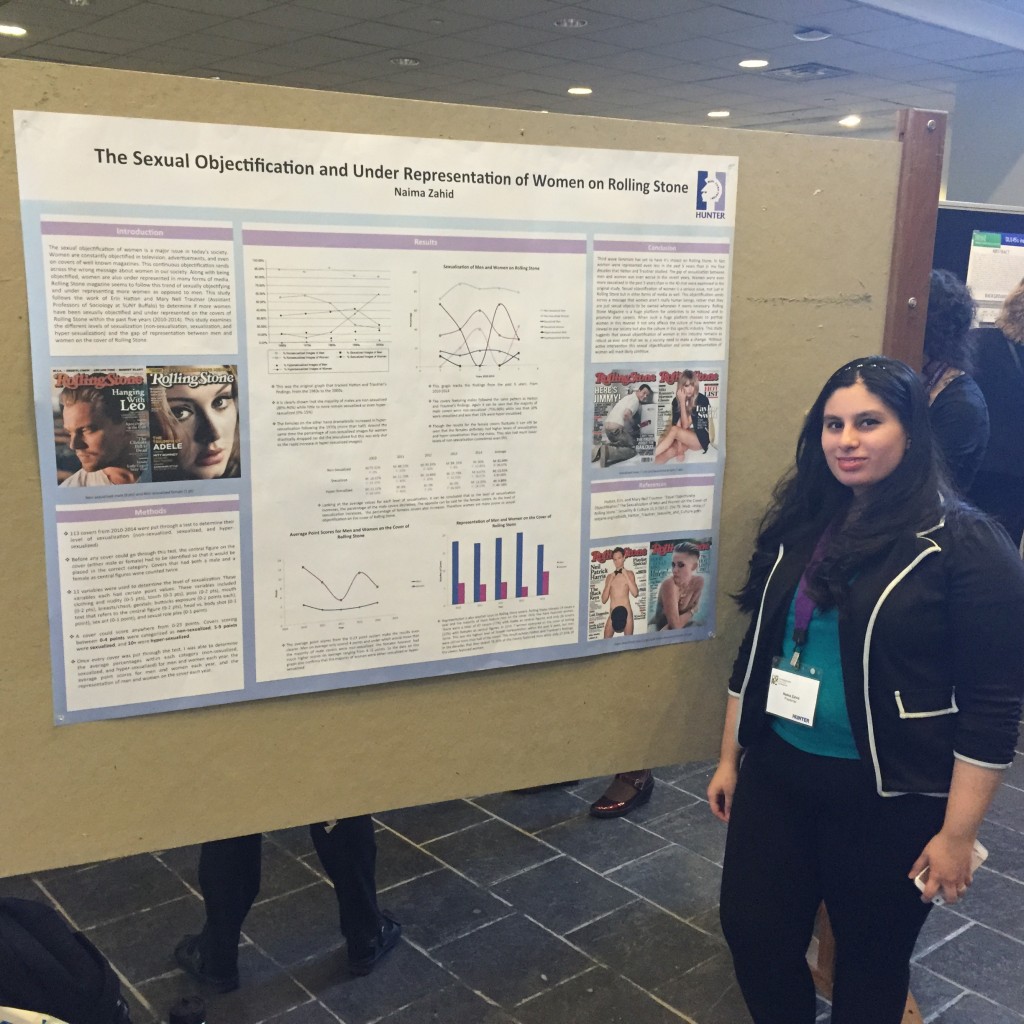 Sean’ Note: Naima includes three amazing pieces in her 120 Portfolio. First, her collaborative essay with two other students examines how Henry Frick’s curating choices in his mansion/museum and argues that he desired both public and personal redemption for  his sins as a ruthless businessman.  Second, her process essay explores her frustrations as a women growing up in a conservative, Pakistani-Muslim  family.   Naima then channels her feminism into a remarkable research project which extends the research done by SUNY sociologists to gauge the objectification and sexualization of women artists on Rolling Stone magazine covers from 2010 to 2014.  Naima presented her research at Hunter’s Undergraduate Research Conference (shown left) on March 25, 2015.  Her  movie version adds a pithy and powerful argument to women to fight such representations.

Isabella Divilova (Fall 2014):  “Even with  movie software crashes and lost data, the movie project was probably the funnest major assignment in English 120.  I knew making mock commercials was ambitious, but I’m glad I went through with it.  I think my research project about gender stereotyping in commercials really lent itself to this approach.  In addition, my two good friends who were my actors really embodied the characters and delivered the comedic effect I wanted.” 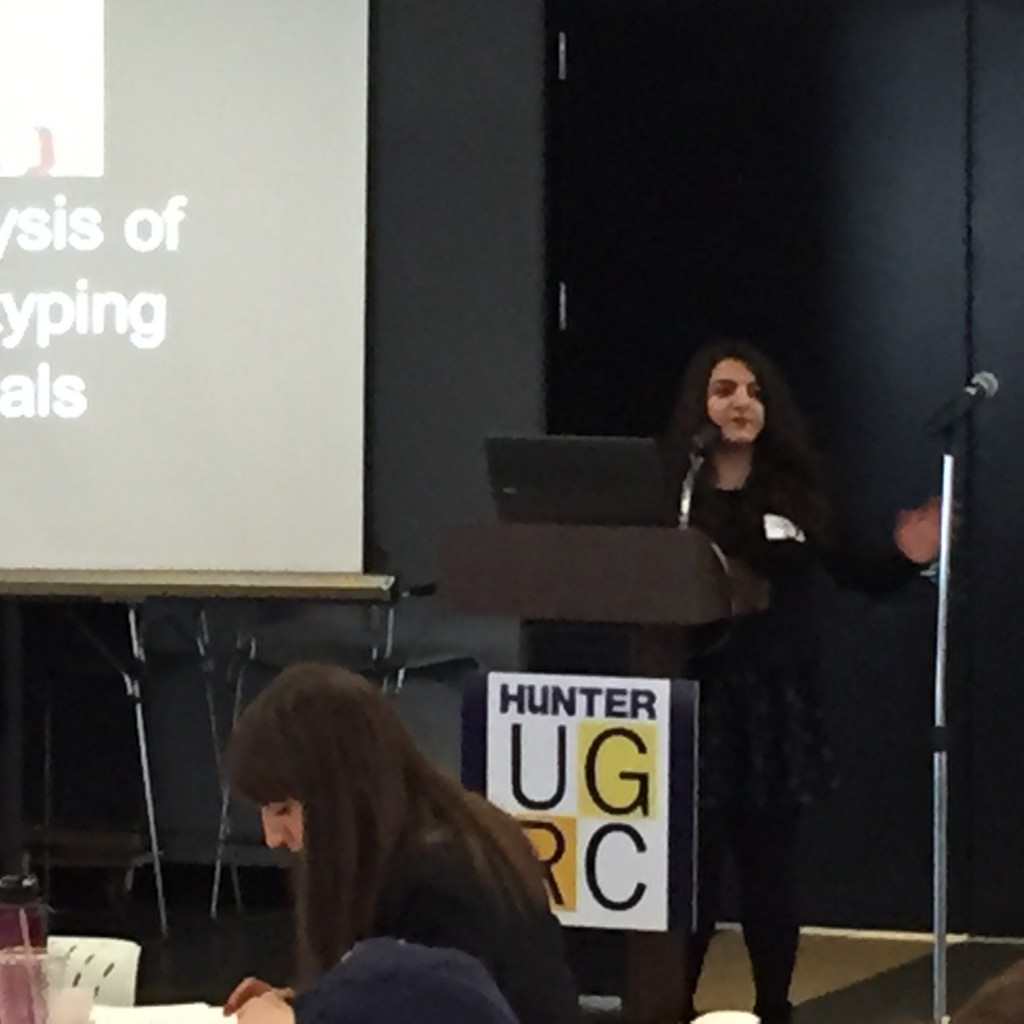 Sean’s Note: Isabella’s 120 Portfolio reveals the deep and sophisticated understanding of rhetoric that she brought to college as a high school debater who challenged outdated models of argument using the critical and creative methods of “performance debate.”  She then crafted a remarkable research project which used a visual rhetorical analysis to demonstrate that the most effective commercials are much less sexist than those celebrated by the industry as “best.”  This research project won writing awards both from the Hunter College English Department and Library.  And Isabella performed some creative debating moves in her movie version of her project, which compares the effectiveness of two mock commercials.  Isabella used her mock commercials to conduct a group exercise at her presentation of her  research at Hunter’s Undergraduate Research Conference (shown left) on March 25, 2015.

Danielle St. Ramy  (Fall 2013): “Before I decided to make my trailer parody I tried more of a documentary type of approach and even a purely text and picture version. But neither captured Bernini’s spirit and fervor the way I wanted.  So, I finally settled on doing a trailer because with help from a few video clips, music, and sound effects the video became a lot more dynamic and I was better able to showcase Bernini’s vitality through all those different components.“

Sean’s Note:  Danielle’s 120 Portfolio research text essay and movie, “How Did Bernini’s Passion and Vitality Foster His knack for Giving Life to Stone?”  won the 2014 Hunter Library Research Paper First Prize. In her tongue-in-cheek “trailer” for her text essay, Danielle uses images,  video, and camera effects to literally give life to stone, just as she argues Bernini’s passions enabled him to do.

I love how Danielle uses color, soft images and gentle music to craft a sly emotional appeal on her homepage.  In my favorite piece here, Danielle  remembers how her poor, small village in Jamaica banded together to gain self-respect and protect its children from violence: “How Did the Youth Crime Watch in My Childhood Neighborhood Help Fight Against our Culture of Poverty?“ 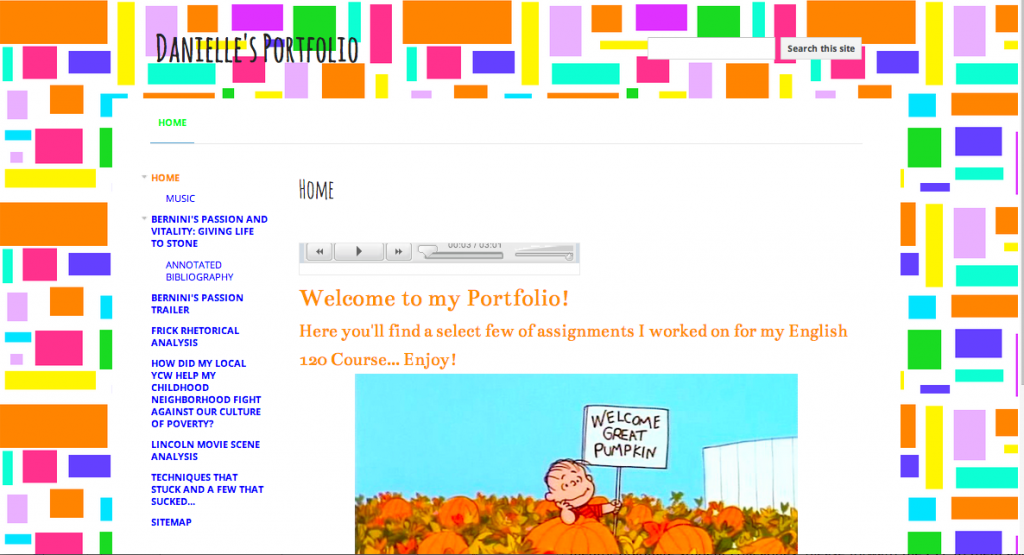 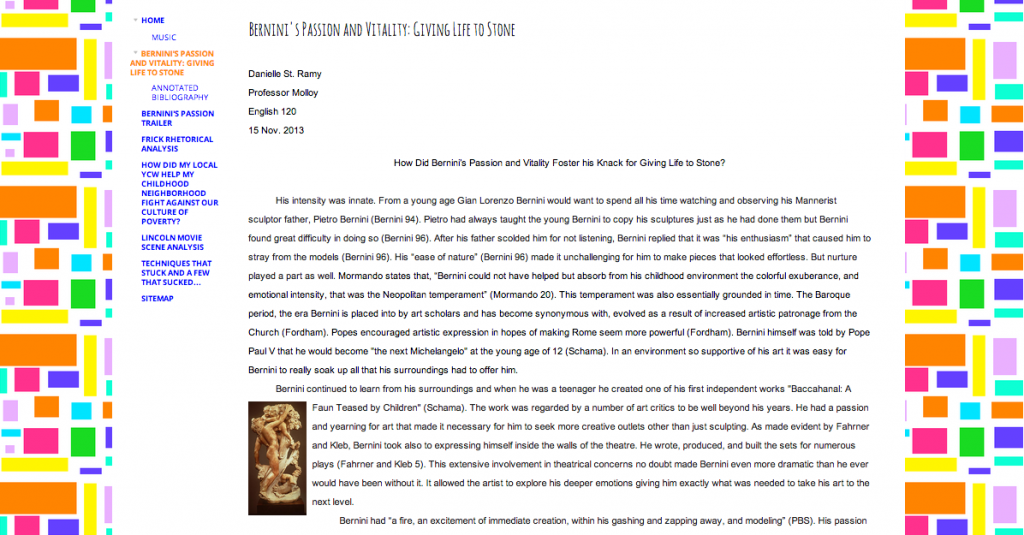 Judy Kang (Fall 2013): “My thoughts about making the movie? It was surprisingly difficult at first. This topic centered around a very personal story and I wanted to accurately portray myself and my struggle growing up with one foot planted in unquestionable obedience and the other in liberal self expression. However, to parallel the tone of the movie to the somber web of my emotions made the video too awkward for me to make and discouraging for other people to watch. I attempted various movie styles and recorded many videos before I decided that a comical approach to the topic efficiently relayed my feelings and accompanied the corresponding essay without the dampening the mood. The results were entirely satisfying and fun to watch along with my parents!“

Sean’s Note:  Judy’s 120 Portfolio demonstrates both her creative and intellectual writing/composing skills. Her research paper asked “What are the effects of  radiation and toxicity from hydraulic fracturing on the environment?”  But her movie reimagined her more personal essay that carefully explored how her mother’s efforts to command her obedience delayed her independence. 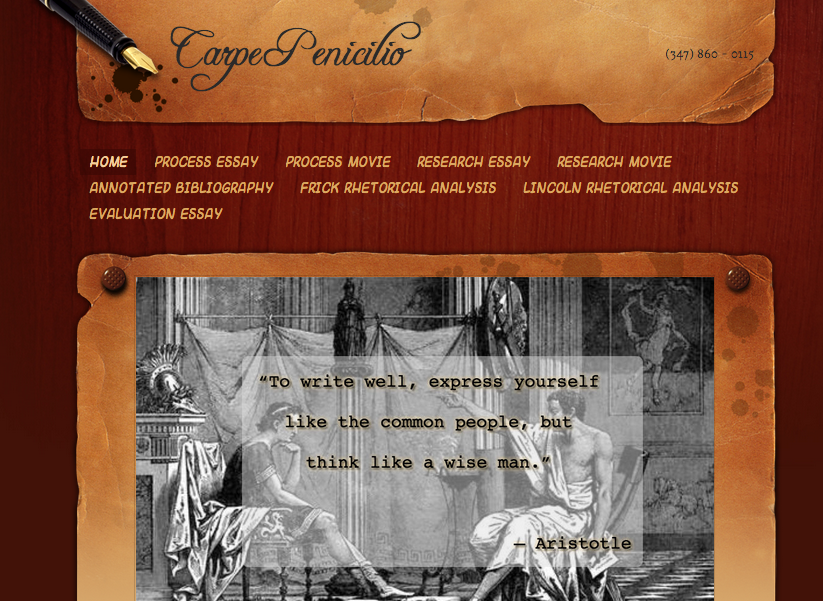 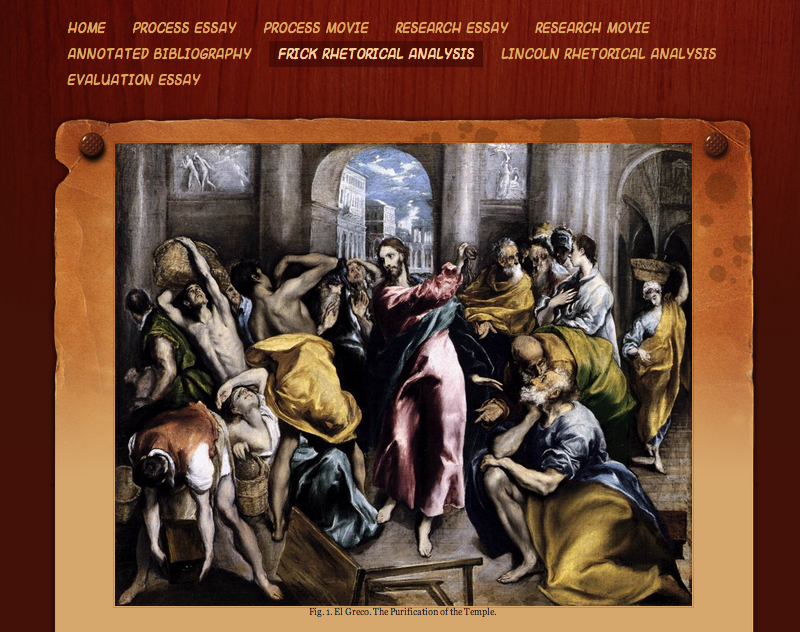 In the movie version, as she explains above, Judy carefully controls the tone and mood of a powerful essay by borrowing from the graphic novel genre and also using humor, a light piano track, images of flowers, and smiling young actors to control how we see her story:

Mario Ismailanji (Spring 2013)  Sean’s Note:  Mario’s 120 Portfolio built from his first essay which used  a social constructivist  lens to explore: “How has Albanian culture changed the way I value promises?” This led Mario to a larger question of media impact on culture:  “How has mass media contributed towards discriminatory stereotypes of Muslims?”

In the movie version, Mario’s subtle emotional argument  first evokes powerful emotions about the September 11 attacks and then shows how those emotions have misled many into blind, misguided rage and urges the viewer to “open your mind to the senseless discrimination against Muslims”.

Jisela Mendez (Fall 2013) Sean’s Note: In Jisela’s 120 Portfolio, she designed and conducted an ambitious visual rhetoric research project, analyzing whether a year of Cosmopolitan Magazines covers supported recents criticisms that it focused on body image, sex, and men.  But in my favorite piece, Jisela’s explores how her grandmother’s struggles in a small Mexican village created a complex legacy for two generations of women in her family. 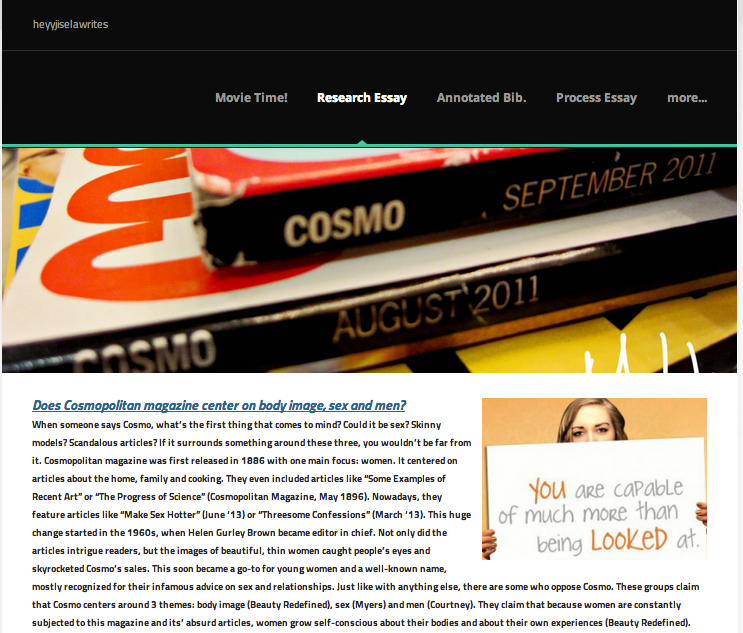 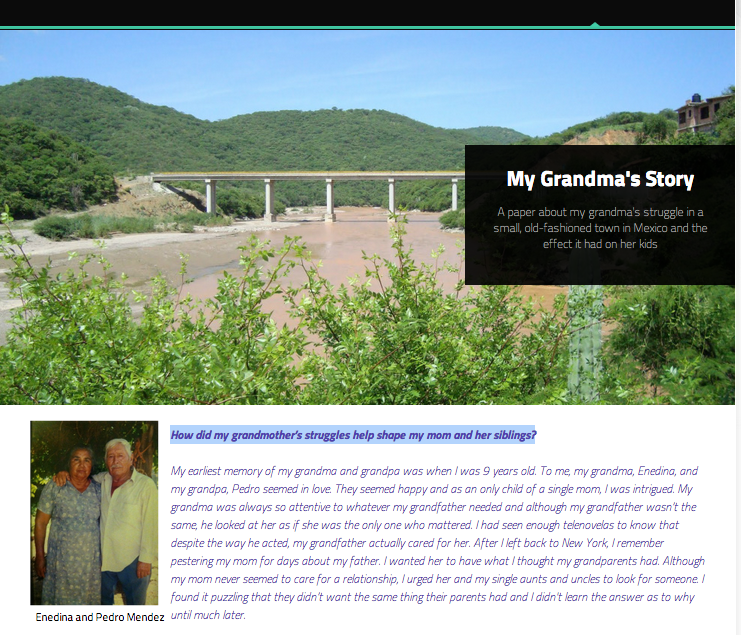 Jisela’s movie is a sly, irreverent parody of female body image expectations created by the media.

Prima Manandhar-Sasaki (Spring 2013):  “I modeled this short movie on an essay I wrote regarding the legitimacy of the Syrian regime. Investigating and reflecting on the true role of government and contradictions that arise when opposition challenges authority proved to be not only enlightening but moving as well. I chose to illustrate personal experiences in a way that reflected the collective emotional experience of the Syrian society in conflict through interview clips, pictures, and specific accounts. I experimented with audio and the interplay between different visual displays (photos and videos) to convey a powerful tone.”

Sean’s Note: Prima’s  research essay and movie asked (presciently, in May of 2013) “Is the Syrian Opposition Justified in Challenging the Assad Regime?” After cataloging the regimes many abuses, she concluded that: “The Syrian opposition is justified in that it is protesting an incompetent government that not only fails in governing policies, but also fails to provide basic human rights.”  Prima’s text essay (which is here) won the 2014 English Department 120 research award.

Sara Panitz  (Fall 2013) Sean’s Note:   Sara’s 120 portfolio, starting with her exquisite home page,  shows her range and depth as a writer/composer. (My favorite piece is her nuanced and underwritten “How can my mom and I stay close when our values separate us?”) 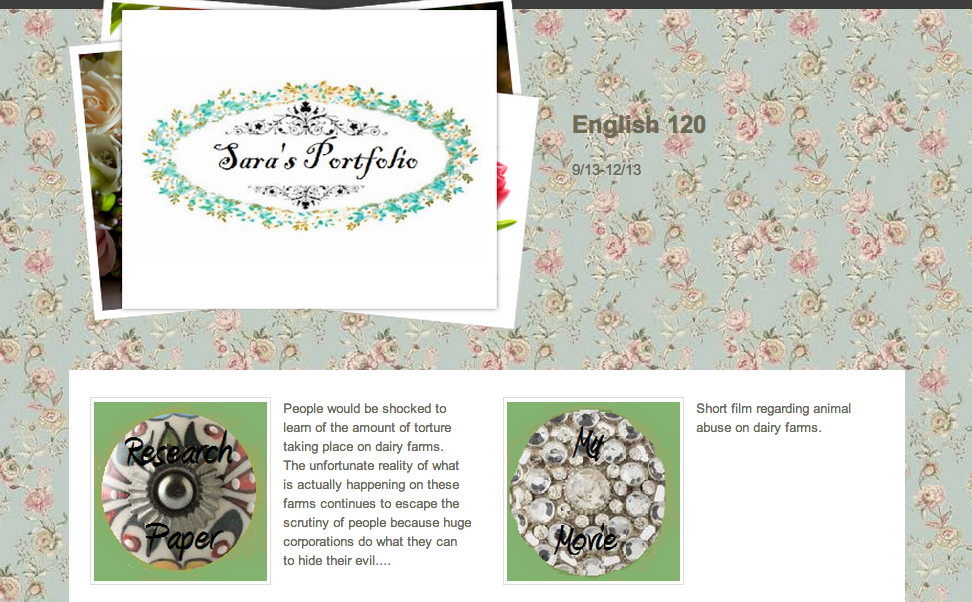 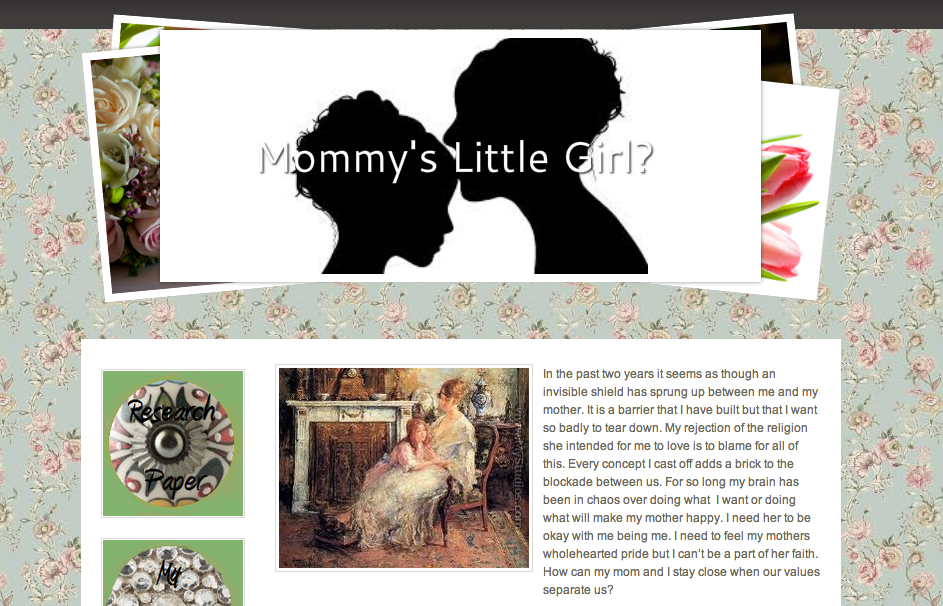 But her movie and research essay are  direct, in-your-face arguments that provoke viewers to act.  In “Does our consumption of dairy products directly affect the treatment of cows?” Sara employs graphic images of animal cruelty and abuse to make powerful arguments, layered over a protest song.   But I really liked the way she inverts the message of the “got milk?” ad campaign in the first section of the movie. 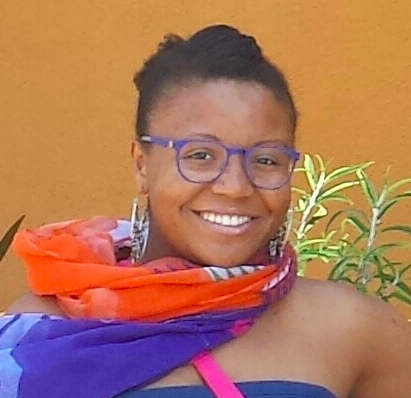 Tanya Tavaris (Spring 2014): “Technically speaking, making the movie itself was not that difficult, as I work with the audio visual team at my church.  The part that intrigued me the most was taking an academic work and translating it into something audible, visual, and rhetorical. The task of making the movie was one that forced me to stretch my thinking and move out of my comfort zone of shyness.  Once I got started, I spent all night working on it. I found that it really challenged me to take all that I learned throughout the semester and apply my newly acquired skills to this one project.  My advice is to give it your all, and don’t be afraid to make mistakes.  When you think about it, this is the type of real world experience that you expect to receive from your college career.“

Sean’s note: Tanya’s 120 portfolio shows her substantial intellectual and creative range.  She  took on a challenging  research project when she decided to conduct a case study of our writing class: “How does my writing class at Hunter College satisfy/compare to Freire’s ideas of praxis and banking models of teaching in The Pedagogy of the Oppressed?” 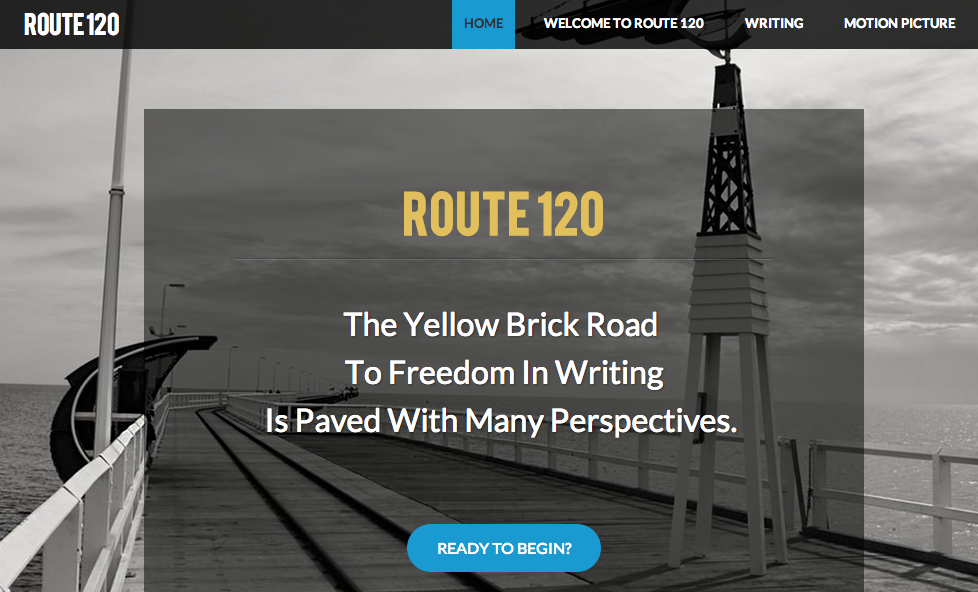 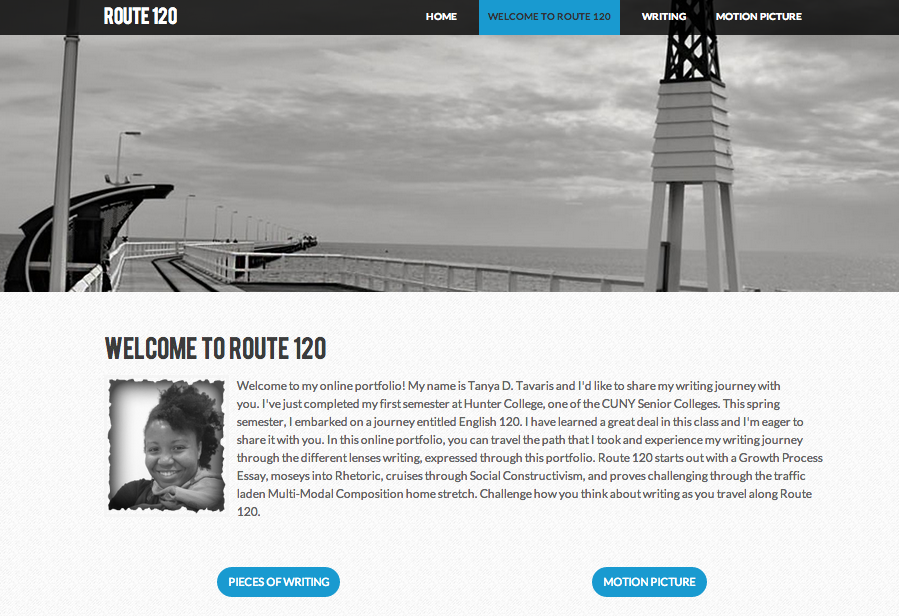 In reimagining the study as a movie, Tanya chose a very light touch,  parodying medical product commercials, and offering our class as a “cure.”

Need help with the Commons? Visit our
help page Send us a message

Built with WordPress Protected by Akismet Powered by CUNY